We will now look at creating a script to parse and format a CSV file. The formatting of the file will add new lines, tabs, and color to the output, so that it is more readable. We can then use grep to display single items from the CSV file. The practical application here is a catalog system based on the CSV files.

A Linux server or a Unix System.

The CSV file or list of comma separated values will come from the file tools that we have in a current directory. This is a catalog of products that we sell. The file contents are shown in the following output:

Each line represents the catalogue with the values

We are having a menstshirt that costs $99 and having 5 Units in stock .

Now , that we have the data ready we can parse the CSV files , lets write the script .

Let's explain the script we have written .

Let's run the script as shown below 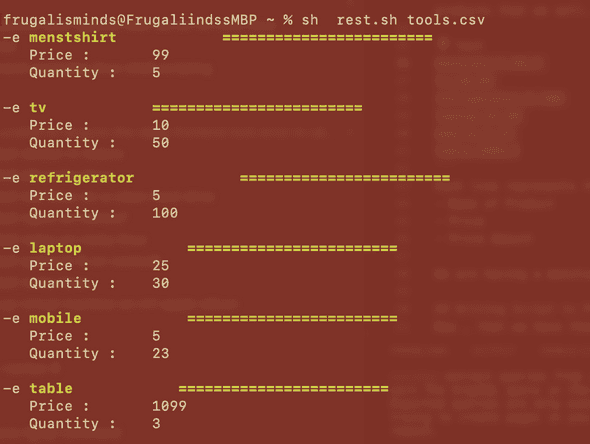 Now that we have created the shell script , i will show you how can use grep command along with the output to search for desired searches. Have a look at grep command examples for more use cases like this .

We have seen how can we write simple shel script to parse csv files . We have used the sample csv to parse and update .