In this post we will follow step by step guide to install Apache Web Server in Ubuntu 22.10 .

Once the Apache Web Server is installed, it can be configured to serve web content from any directory and anywhere on the system.

The Apache Web Server can be used as a load balancer by using the ModProxyBalancer as well.

A Ubuntu 22.10 server or a Desktop with root privilages. You can also get a Free VPS hosting like Vultr or DigitalOcean.

We do not need to configure repository for installing apache2 . Execute the following command 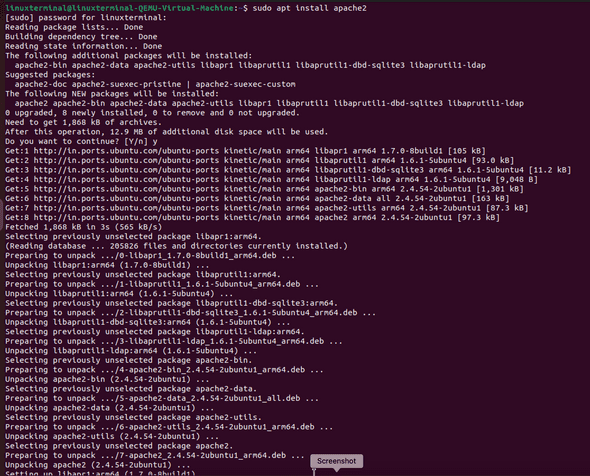 Once installed, verify the installation of the Apache server is sucessful or not . We can do this by checking apache service is running or not . Execute the below command to check the running status of apache .

We havent enabled any systemd , but apache itself enables systemd and enables apache2 service for us and we can get the apache2 status using above command .

if we look above there are basically different types of Apache profiles that are attached to Apache which we need to enable access in order to access the apache application outside of my internal OS network or host nwetwork.

As of now we will give access to Apache which will open port 80 outside host network.

But if you see think we also have Apache full as well as Apache secure as a part of app list output. Apache secure is basically meant for providing http based access and open port 8443. If we want to enable port 80 and 8443 we can enable "Apache Full" .

Have a look at the output for checking the status of firewall with Apache .

lets verify if apache is still running or not .

Now it's clear from the output above that my Apache server is still running once I have configured the the firewall configuration .

Now lets verifiy Apache page is opened or not once you have enable the firewall for Apache. Now , you should be able to access the Apache home page from a IP and as well as using localhost shown below . Above settings is helpful if you are running your Apache on any of the the hosted service or any e VPS hosting provided by Digital ocean Godaddy hostinger Amazon ec2 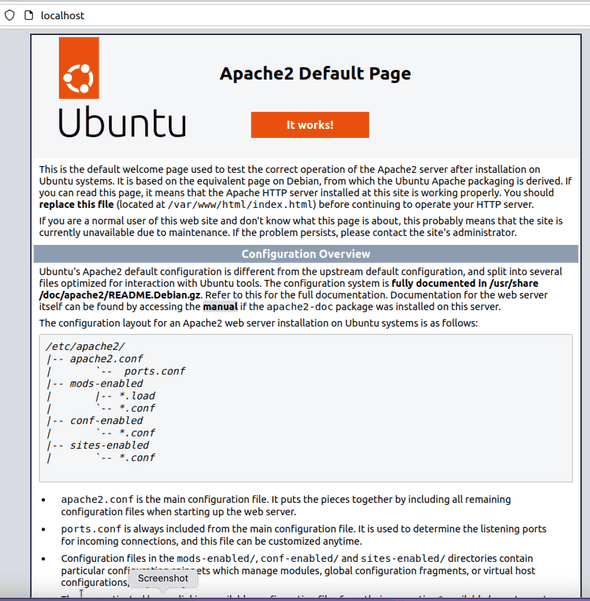 In Order to restart apache server we can use

In Order to Stop apache service we can use

In Order to Start apache service we can use .

Sometimes we disable the Apache configuration and we make sure the package does it start up as a service starts so if you face this kind of scenarios then you can try using the below command which will make sure the Apache is running once your server boots up.

Logs are one of the most important aspect of any application or software running on any kind of system. so if you are using Apache in Ubuntu then you might need to find out the server logs and debug any issues related to Apache so if you are facing any trouble such as your Apache service is not starting or Apache is hanged up then you can go ahead and verify the logs mentioned below.

Apache is one of the most popular web server used nowadays and we have seen how we can configure the basic Apache server in any of the Linux systems we have primarily used Ubuntu but this configuration and the steps mentioned above will be useful and valid for any of the Linux service you are using .